Located a few miles off the Northumberland coast, a handful of small and rocky islands make up the collective group that is the Farne Islands. Visually unremarkable, the highest point, on Inner Farne, is a mere 19 miles above sea level, while some of the smaller “islands” dip below the sea on all but the lowest tides.

Yet these islands have a major ecological interest; in the summer months they are taken over by approximately 100, 000 pairs of nesting seabirds, with species ranging from guillemots to terns, and more famously, Atlantic puffins. These cute little seabirds spend most of the year out at sea, but come inland during the warm months to breed.

The Farne Islands themselves are cared for by the National Trust, which permit landings during the busy months. This presents a rare opportunity for close contact with the natural world, and every year thousands of visitors find themselves greeted by the sights, sounds (and smells!) of one of the wonders of the natural world.

The islands also represent a unique photographic opportunity, offering easy access to wild animals without the need for very expensive photographic equipment. In many instances the photographer can get closer to these birds than possible even at a wildlife reserve or zoo.

I discovered the islands about eight years ago, and have tried to make a trip there at least once every breeding season. The experience continues to amaze me today as much as it did that first visit. The skies swarming with seabirds in flight in different directions, not unlike fighter planes from some World War 2 scene. The sight of sea birds crammed into the little space available. The sight of babies being young and fluffy hatchlings.

I’ve appended a selection of photos from my trip there last Monday, and hope that you will enjoy them as a brief introduction to the wonderful Atlantic puffin. 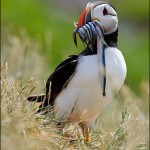 A puffin with sand eels in its mouth. 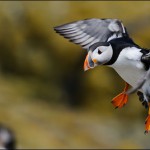 A puffin comes in to land. Suited primarily to diving for fish, they sometimes look awkward in flight. 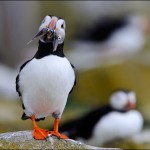 The puffin has a cute, sometimes comical stature. That in conjunction with its colourful beak sometimes lead it to be called the “clown of the ocean”. 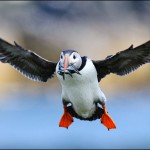 Puffins use their tongues to retain fish within their beak, allowing them to catch several before returning with them to feed their young. 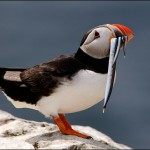 Although puffins are not a threatened species, instances have occasionally threatened their numbers in specific colonies. 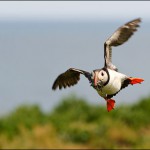 Close proximity means that it’s possible to get photographs with relatively simple kit; this shot was taken with a 200mm lens. 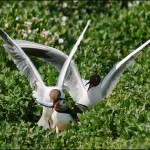 Black headed gulls and other such birds are a menace to the atlantic puffin, often waiting to steal the fish as they return to feed their young. A puffin that doesn’t land next to its burrow frequently has to surrender its haul to the waiting scavengers. 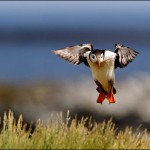 The puffin bears some similarity to penguins, with their streamlined shape allowing them to dive for up to 70m. 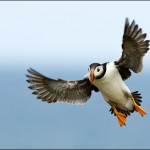 Puffins are awkward fliers, with their little wings flapping at an implausible speed. It is however possible to get more aesthetically pleasing images of them in flight particularly when they are about to land.